Most male breast cancer is hormone dependent. The cancer cells almost invariably have receptors for estrogen and usually progesterone, and these hormones drive their growth. Therapy aimed at interfering with this hormone signal – endocrine therapy – is perhaps the most effective thing on offer to fight this disease.
Broadly speaking there are two ways to interfere in the hormone signal: you can block the receptor or you can block the production of the hormone. Tamoxifen works by blocking the estrogen receptor, and remains the most common endocrine therapy for men with breast cancer, and is still commonly used for women. Aromatase inhibitors interfere in the production of estrogen by enzymes called aromatases, and so reduce the production of the hormones themselves. In this schematic from Wikipedia, you can see the estrogens in the pink triangle at the bottom right, and the orange box marks the aromatase enzymes that produce them. 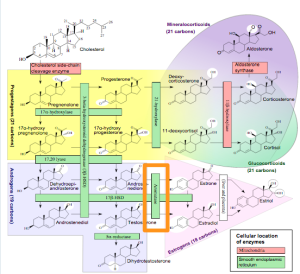 Many women switch to aromatase inhibitors – exemestane, anastrozole, letrozole – during their endocrine therapy, and there is clinical data to show that the aromatase inhibitors are better, meaning that women who take them both live longer and have fewer side effects.
For men aromatase inhibitors are not yet commonly prescribed, as there is insufficient data on efficacy, while Tamoxifen is proven. Also, there is some evidence from the laboratory that aromatase inhibitors may cause an increase in testosterone (one of the hormones they convert to estradiol, the most common and potent estrogen) and that this can then overwhelm the aromatase inhibition. A strategy that has been proposed, and is being tested, is to combine aromatase inhibition with gonadotropin-releasing hormone (GnRH) analogues – these desensitize the pituitary and can reduce the levels of testosterone, thus potentially overcoming the concern about testosterone build up.
A direct test of this idea was the goal of a clinical trial in which goserelin was combined with anastrozole, but worryingly this trial currently reports “This study has been withdrawn prior to enrollment. (poor accrual)” on its webpage at clinicaltrials.gov.
In the meantime, while we await a trial, is there anything that can be learned from cases reported in the literature already? That is what Zagouri et al set out to ask in their very interesting paper.

The authors combed the literature for reports of cases or series where aromatase inhibitors were used in the adjuvant setting for metastatic male breast cancer and found 13 published papers and 2 conference abstracts. When they pooled the data from these they had information on 102 individual patients – not a large group sadly for statistical purposes, but impressive for such a rare disease and such a rare treatment on top of that.
The authors core conclusion is newsworthy:

Furthermore they find that the co- administration of GnRH analogues tripled the clinical benefit in terms of tumor response, for example stabilizing disease as measured by scans, which makes sense in the context of our understanding of hormone biology, as briefly discussed above. Unfortunately the addition of the GnRH analog did not statistically either increase overall survival or progression free survival.

First of all – this is potentially great news in that it seems to provide additional rationale for the testing of aromatase inhibitors in the treatment of the male disease. Whether it makes sense to switch from Tamoxifen requires some more careful consideration, and whether the GnRH analogue should always be included also.
Regarding the data in the paper, the finding that aromatase inhibitors improve therapeutic tumor response but do not increase progression free survival is paradoxical. Note that progression free survival is different from overall survival – it measures the time the patient’s cancer does not progress i.e. grow or spread, usually measured with scans. It is not that uncommon for targeted therapies to keep cancer under control longer, and so the patient progression free longer, but when the cancer does come back, it does so with a vengeance and overall survival remains the same. It is however hard to understand how in his paper you have both improved response and no change in progression free survival. The authors suggest that the lack if significance on the survival is due the the fact that few of their 102 cases had data on survival and so this part of the analysis is not statistically informative. Again, alas, a larger study will be needed to settle this question. However, for now I would keep my eye on the identified tumor response that the authors noted.
Recently we discussed the finding that hormone deprivation therapy such as aromatase inhibitors appears to select for mutations in estrogen receptors that are active in the absence of hormone, and so overcome this type of endocrine therapy. However, it appears that these mutants remain susceptible to suppression with tamoxifen which acts as a direct hormone receptor inhibitor.
In conclusion, if men are candidates for aromatase inhibitors it could be proposed that this should be the first line of endocrine therapy, and when/if it fails due to estrogen receptor mutation it could be followed up with tamoxifen. This might give you the longest hormone control possible with current drugs. I think that is worth a trial.

One thought on “aromatase inhibitors work for #malebreastcancer according to Zagouri et al – should they be the first hormone therapy?”