Incidence of breast cancer in a cohort of 5,135 transgender veterans

Most breast cancers are hormone driven, at least at first, and hormone therapy is one of the key treatments that can be used effectively against this group of cancers. In brief, the hormones estrogen and progesterone drive ER+/PR+ breast cancers to grow, and therapy interrupts this stimulus, slowing the cancer cells, perhaps killing them by starving them or at least putting them in a dormant state. The question arises, then, whether high levels of estrogen are causally involved in triggering these ER+/PR+ breast cancers. In women evidence related to variation in breast cancer risk with reproductive history etc suggests that there might be a connection. What about in men?

First, male breast cancer is also most commonly ER+/PR+, and men do have estrogen, just as women have testosterone albeit with different balances and levels (see picture and Wikipedia Estrogen entry for the interrelationship between androgens including testosterone and estrogens). We have no information about whether hormone levels in men alter breast cancer risk. There are no births that can change things and provide a natural experiment with which this question could be answered. Brown and Jones have found a different, natural experiment in which to explore this issue: the hormone therapy often given to transgender people. 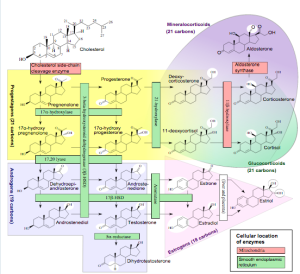 Using the Veterans Health Administration of the US, which both provides hormone therapy to veterans diagnosed with gender dysphoria and has excellent electronic health records, Brown and Jones studied the question of whether administration of cross-sex hormone (CSH) treatments increased the risk of breast cancer. They found that it did not, consistent with other studies in Europe. As they summarize:

“… it appears that [transgender] veterans do not display an increase in breast cancer incidence.”

Of note, about half of the transgender veterans received CSH, and the average was 6.5 years. While not as long as the approximately 3 decades of natural estrogen that precede breast cancer in women, this is not insubstantial.

Any study of this nature can be criticized on the basis of not including enough people to achieve statistics significance. However, the study included 2,645 transgender veterans that did receive CSH, 1,386 of whom were men at the time of hormone start. Not a small number in comparison to the data sets typical in the world of male breast cancer 😉

There are clearly significant limitations of this study, particularly regarding duration of hormone therapy, and the numbers of people studied, which are small when you take the low incidence of male breast cancer into account.

Personally, I think it is fair to say that a relatively brief duration of estrogen exposure does not dramatically increase your risk for breast cancer, man or woman. This is good news.

I commend Drs. Brown and Jones for taking the opportunity that the Veterans Health Administration data offered to investigate this issue.