Aromatase inhibitors with or without luteinizing hormone-releasing hormone agonist for metastatic male breast cancer: report of four cases and review of the literature

Tamoxifen remains the recommended hormone therapy for men with breast cancer that is ER/PR positive. Tamoxifen interferes in the action of estrogen directly at the estrogen receptor and so works in every scenario. Aromatase inhibitors by contrast interfere in the production, not the action, of estrogens (see diagram below). Although biochemically it is thought that estrogens are always produced by the action of aromatases on testosterones, there is a report from 1986 by Harris et al. on 5 men, that showed that testicular sterodogenesis is unaffected.

I have to confess that I do not really understand this observation by Harris et al., as subsequent work has shown that aromatases exist in testes and are likely responsible for the synthesis of estrogens there too. It could be that the aromatase inhibitor used in 1986 by Harris and colleagues, Aminoglutethimide, did not make it to the testes at the doses used. Nevertheless, as is often the case with male breast cancer, very little data exists, and so reports of a handful of cases can be influential. 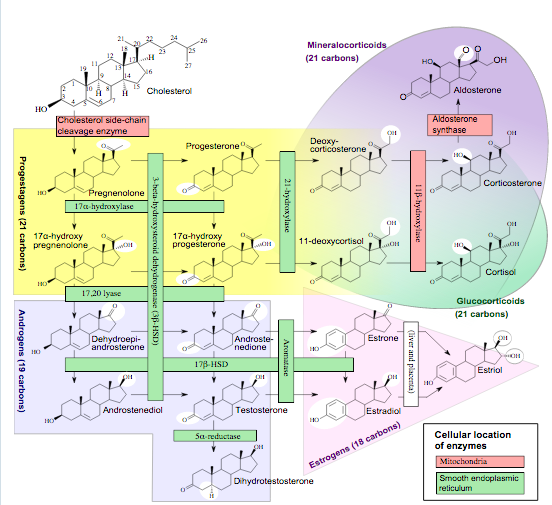 Now, one of the 5 men treated by Harris et al. had no testes, having had these removed surgically, an early form of treatment of male breast cancer, and this man responded to the Aminoglutethimide for 14 months. Thankfully orchiectomy is no longer practiced routinely for male breast cancer, but the loss of testicular function can also be achieved medically by the use of a gonadotropin(luteinizing)-releasing hormone agonist (GH-RH). This sounds counterintuitive  as luteinizing hormone causes the production of testosterone and so estrogen – but the way that the agonist works is by something called the flare effect. As stated in the Wikipedia article:

Agonists do not quickly dissociate from the GnRH receptor. As a result, initially there is an increase in FSH and LH secretion (so-called “flare effect”).However, after about ten days, a profound hypogonadal effect (i.e. decrease in FSH and LH) is achieved through receptor downregulation by internalization of receptors. Generally this induced and reversible hypogonadism is the therapeutic goal.

There are some attempts aimed at investigating this question directly via a clinical trial. One, SWOG-S0511, unfortunately was withdrawn, but another, NCT01638247, run by the German Breast Cancer Group remains active, and will hopefully provide more definitive information in due course.

In the meantime Kuba et al provide another small series of men, four, that are treated with aromatase inhibitors, with or without the GH-RH agonist (which they call LH-RH agonist, but it is the same thing).

Interestingly, these men reported fewer and milder side effects than are typically observed with tamoxifen.

Stop me if this sounds familiar…. but again we have a very small study, or even a series of case reports really, which makes it hard to reach firm conclusions. On the other hand this work can be seen as a development of the 1986 Harris et al paper, itself a study of only 5 patients. Until we have the results of the trial mentioned above, we will not know for sure.

In the meantime I do believe this is encouraging information, and to me makes sense as I am not aware of the basis for the selective action of the aromatase inhibitors on peripheral vs testicular aromatases (I am not an expert on hormone biology which is pretty complicated…). While doctors are not likely to prescribe aromatase inhibitors readily in the absence of any definitive data, it might at least be worth discussing in a situation where tamoxifen no longer works and the cancer has advanced – should I ever reach this point, I will surely raise the possibility of at least trying an aromatase inhibitor.

One thought on “Maybe aromatase inhibitors can be used in metastatic #malebreastcancer?”